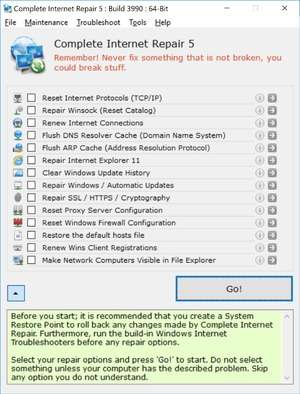 “Complete Internet Repair will attempt to repair everything internet related”

A review of Complete Internet Repair by Tina de Pierre

Complete Internet Repair is a cool utility which helps you repair common networking programs which generally have a negative effect on your Internet connectivity.

This portable product is pretty handy, as you're not forced to install the product; this means that you're able to perform network-related repairs on a system which overwise is already under the weather. With that said, no changes to your Windows Registry will be made.

The main interface of the program is pretty simple and doesn't have much to it. That's fine, as the premise behind this program is simply to repair issues with your Internet connection.

The program starts off by automating actions which technical support personnel would direct you to do anyways. Namely: Complete Internet Repair will attempt to repair Winsock, Windows Update, SSL/HTTPS and the Workgroups Computers view.

If the above doesn't work, the program will attempt to flush the DNS (manually: cmd.exe, ipconfig /flushdns), reset the Windows Firewall configuration and reset your Windows HOSTS file which may have been damaged by a virus or a trojan or simply human error.

The bottom line: This program is simple and can really come in handy if you're having Internet connectivity issues.

This download is licensed as freeware for the Windows (32-bit and 64-bit) operating system on a laptop or desktop PC from internet utilities without restrictions. Complete Internet Repair 6.0.3.5003 is available to all software users as a free download for Windows 10 PCs but also without a hitch on Windows 7 and Windows 8.

Compatibility with this Internet repair software may vary, but will generally run fine under Microsoft Windows 10, Windows 8, Windows 8.1, Windows 7, Windows Vista and Windows XP on either a 32-bit or 64-bit setup. A separate x64 version may be available from Rizonesoft.

The program was created by the developer as a freeware product, but donations for the continued development are highly appreciated. You may generally make a donation via the developer's main web site.

Ranking in
Internet Software
#2 of 69